How NFTs can HELP rather than hinder the environment

What we'll be covering in this article:

NFTs are a core weapon in an arsenal of environmentally beneficial tools for businesses, representing a way to keep track of carbon offset credits.

The digital elephant in the room

When it comes to environmental issues, NFTs get bad press. Whenever you see an article online relating to Blockchain or Crypto and its relationship with the environment, the focus is likely to be on the vast amount of power that has to be consumed in order to maintain them. This power consumption is inherent in the way that they work and the process by which they are ‘minted’ through ‘proof of work’, where computers use significant amounts of processing power to validate the existence of the NFTs themselves.

Yes, it’s an elephant in the room that can’t be ignored; on the face of it, there are energy consumption issues associated with the use of NFTs.

Actually, let us be more specific; there are energy consumption issues associated with some NFTs. This proof of work concept that requires mining is actually associated mainly with Bitcoin and Ethereum, and there are a variety of other Blockchain mechanisms which don’t carry the same environmental impact. For example Stellar has the Stellar Consensus Protocol (SCP). This involves a network of nodes (individuals who download software) that update the ledger with transactions - it takes almost zero energy usage.

Significantly, it’s that latter blockchain, Stellar, that we at Task and The Blue Marble have been working with - with their environmental credentials just one of the many benefits that they offer over other platforms and token types. (To put some numbers on the matter, compare the 1,575 kilowatt-hours per transaction associated with Bitcoin, compared to the 0.00022 kilowatt-hours per transaction associated with Stellar Lumens).

Of course, that’s still an appreciable level of energy consumption. But it is a necessary one; the very power of Blockchain comes from the way in which tokens are created and verified - it’s exactly this which gives them their decentralised but secure basis, allowing for the creation of something that is irreplaceable, and thus incredibly valuable in the way it can be used to verify the existence of what it represents.

Of course, in the case of cryptocurrency, that verification is of the value contained within the token. But in the case of NFTs, it is verification of the real and true nature of the information contained within the token. In this way, NFTs are far more than just the ‘trendy’ pieces of art (as is how they are so often represented in the media…). Instead, they are embodiments of meaningful, crucial, verified data.

Why does this matter to us?

Well, our focus is on the way in which NFT technology can assist in creating a meaningful and secure system for the purchase of carbon removal. Before we get into the details of the link between NFTs and carbon removal, it’s perhaps useful to explain briefly what we mean with the term carbon removal. And if you’re looking for a more in-depth exploration of the matter, check out our handy blog here.

It can be easy to become bogged down in the multitude of vocabulary that surrounds the commercial handling of carbon, with subtly different phrases meaning quite different things in relation the actual environmental impact they deliver.

When we talk about carbon removal at The Blue Marble, Task's NFT marketplace, we’re not talking about the mere exchange of allowances between polluting companies. We’re talking about initiatives which actually ‘suck out’ or sequester existing carbon from the environment.

This can include (but is not limited to) projects which promote improved agricultural and living practices amongst communities which would otherwise rely on traditional, carbon-heavy approaches - either by changing their underlying practices, planting trees, or implementing modern technologies which engage in air capture and mineralisation.

So that’s the process from an environmental point of view. But what about from a business one? Many governments and supra-national bodies are imposing increasingly stringent requirements upon private business in relation to their environmental impacts and outputs of private companies - especially in relation to their carbon emissions. These initiatives include the UN Sustainable Development Goals, which we’ve written more on here. 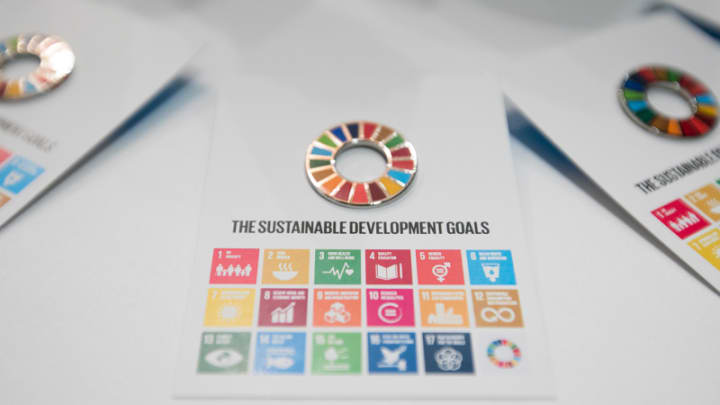 On top of this, even without top-down pressure from governments, companies are increasingly realising that they carry an ethical responsibility to practice business in a way that does not come at the expense of wider society. And there’s an added benefit in engaging in this self-driven ethical regulation: it resonates with audiences, who are increasingly socially aware and discerning in their product choices.

Indeed, a recent Deloitte report on consumer behaviour indicated that 32% of consumers were making an effort to actively seek out businesses committed to sustainable practices, whilst 28% of consumers would choose to jettison products and companies on the basis of their negative environmental or ethical performance (a percentage that increases significantly in relation to Gen Z consumers specifically).

The result of both this top-down and bottom-up pressure is a pressing need for companies to reduce their carbon footprint. But for some firms, the production of carbon is inherent in their activities and even with technological innovation cannot be reduced any further. In these cases, they need to find a more creative way to reduce carbon in the atmosphere - and that’s where the idea of paying someone else to remove carbon for you comes in.

Bringing NFTs and Carbon Removal together

That’s important, because what with carbon removal being an intangible thing, it would be feasible for the same carbon elimination to be sold repeatedly to lots of people (a bit like selling the Golden Gate Bridge again and again and again…). But when an NFT is issued for a certain amount of carbon elimination, then it becomes a tangible, traceable record with both an issuer and an owner (with the NF in NFT meaning ‘non-fungible’, i.e: not interchangeable).

As such, NFTs represent a very sensible way to structure the trade of carbon and create a system that all parties can absolutely trust in.

An added benefit of using NFTs to structure these transactions and relationships is that they’re very much part of the current zeitgeist. Far from being faddy though, what this means is that the people involved in carbon offset programs (who - you’ll see from our section below - are often smallholder operations from less developed countries) have the ability to access a global platform that receives widespread attention. 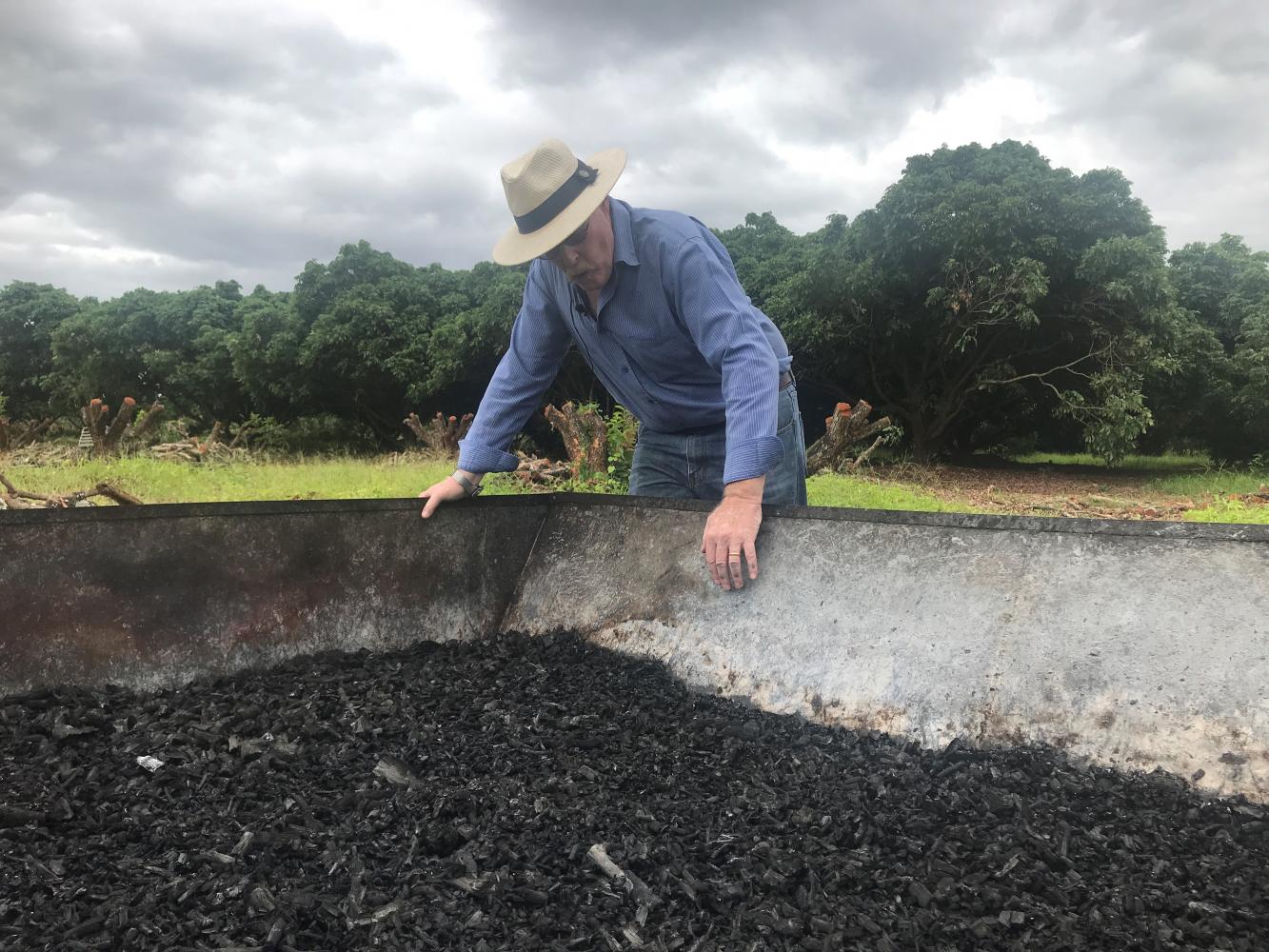 Perhaps the best way to demonstrate how NFTs can operate to facilitate improved environmental outcomes and benefits for everybody is by showing a real world example.

Just like an online shop selling products on their page, we’re working with Biochar Life teo help them sell carbon that has been eliminated from the environment. It is being sold in the form of an NFT that promises 1.97 t CO2eq has been sequestered (effectively, re-embedded in the soil rather than released from the atmosphere). - you can view details of this NFT at the end of this section.

Typically when a buyer purchases an  NFT they hold it in their wallet and look to trade it depending how the value increases. However, these NFTs are created specifically to represent carbon removed and therefore are purchased as an offset. So instead of the NFT being re-traded, after the NFT has been purchased by the end buyer, the industry practice is to retire the certificate to prevent double-accounting.

Since the NFTs are on the blockchain and public, this can help the industry monitor double-accounting activities along with working with established registries such as the one by Carbon Standard International (EBC-aligned). 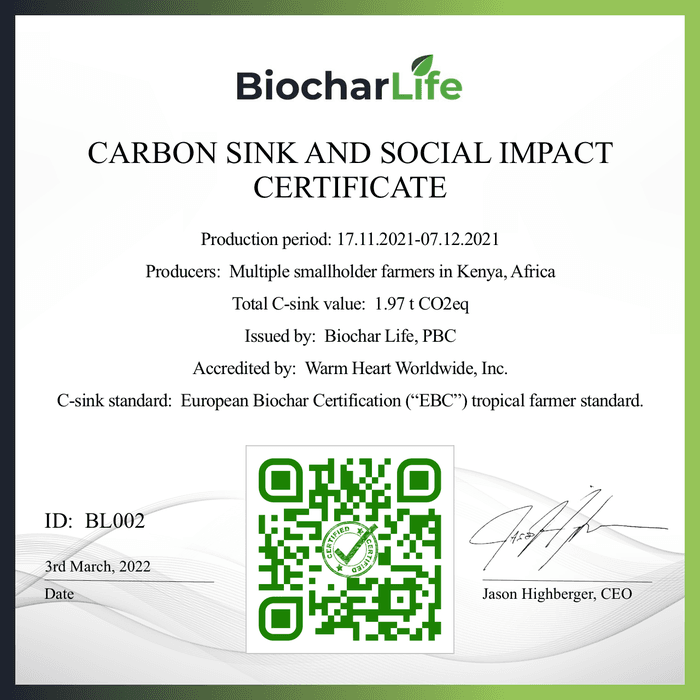 Who sits at the heart of the removal?

So who is supplying the carbon removal that underpins each of the NFTs issued? In this case, it’s a fantastic initiative called ‘Biochar life’. Their amazing initiative works with smallholder farmers (a surprisingly significant source of agricultural carbon production) in order to educate them (and give them the resources needed) to engage in soil management methods which avoid the carbon outputs associated with traditional ‘slash and burn’ farming. The original sale of the NFT directly funds the initiative.

The net result is not only an overall reduction of carbon in the atmosphere, but significantly improved living conditions for the farmers themselves, and for the local communities who are no longer subjected to the direct health effects of seasonal crop burning.

Meanwhile, those purchasing NFTs are able to meet their environmental legislative obligations, align with the values of their consumer market, and know that they are contributing to a better future for the planet. It’s win, win, win, win, win.

Are you involved with a carbon removal program and looking to scale more effectively? Maybe you're interested to understand more about environmental NFTs? 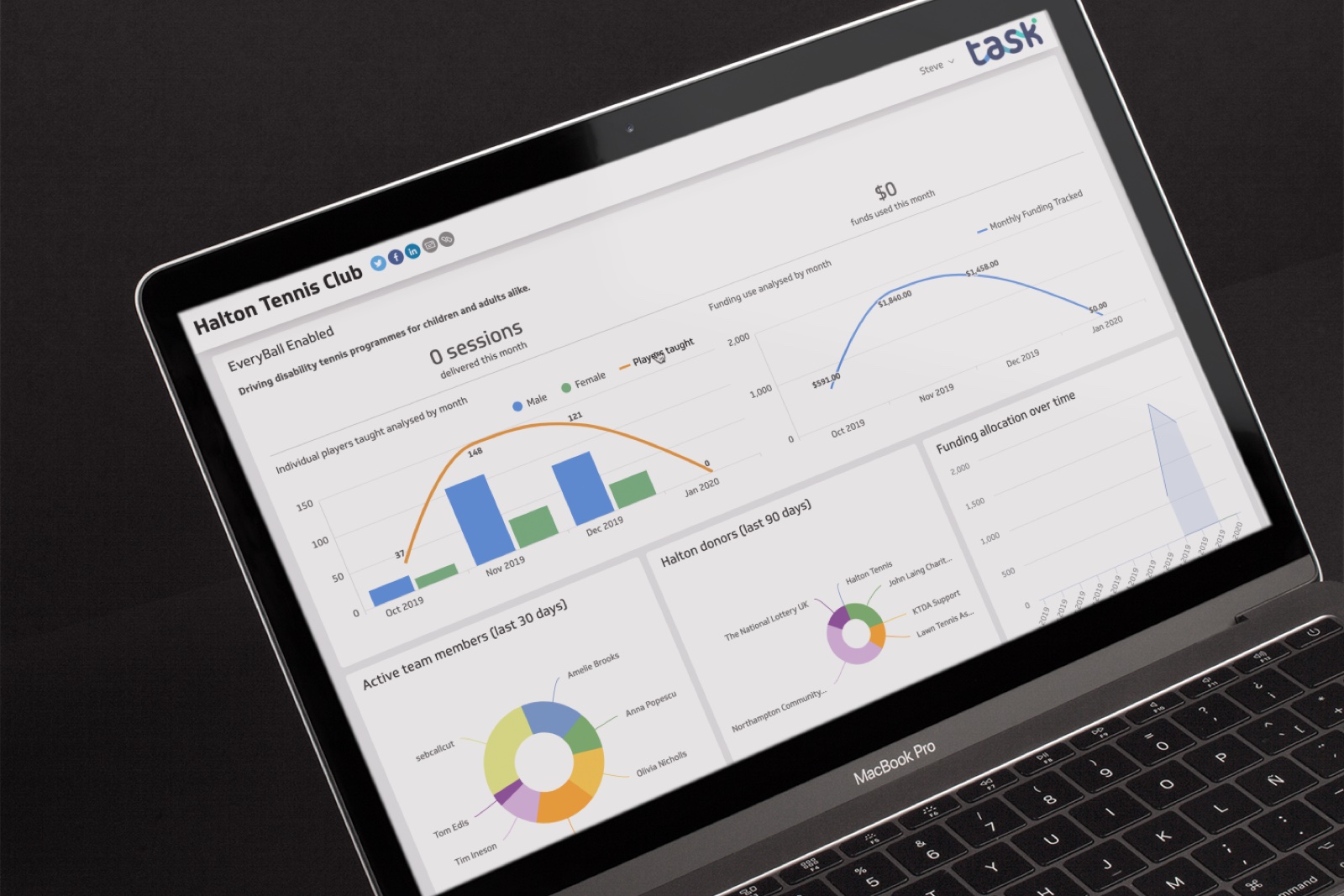 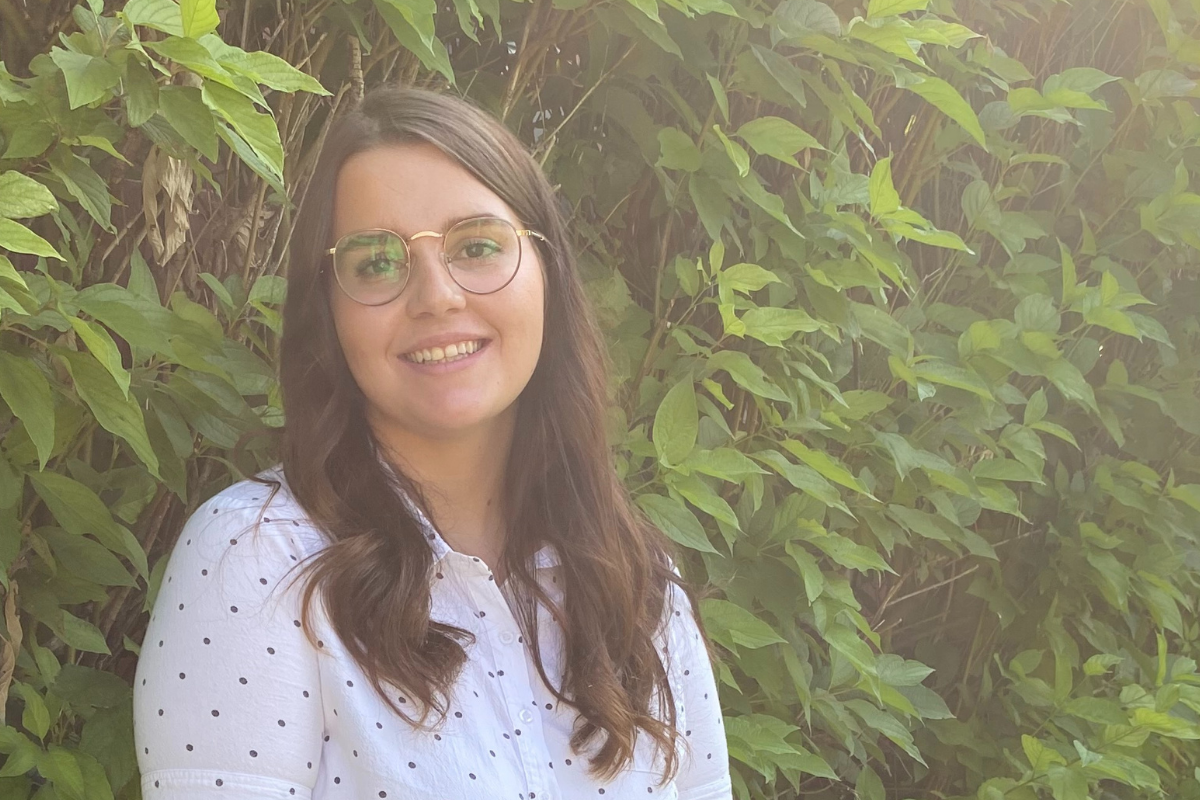 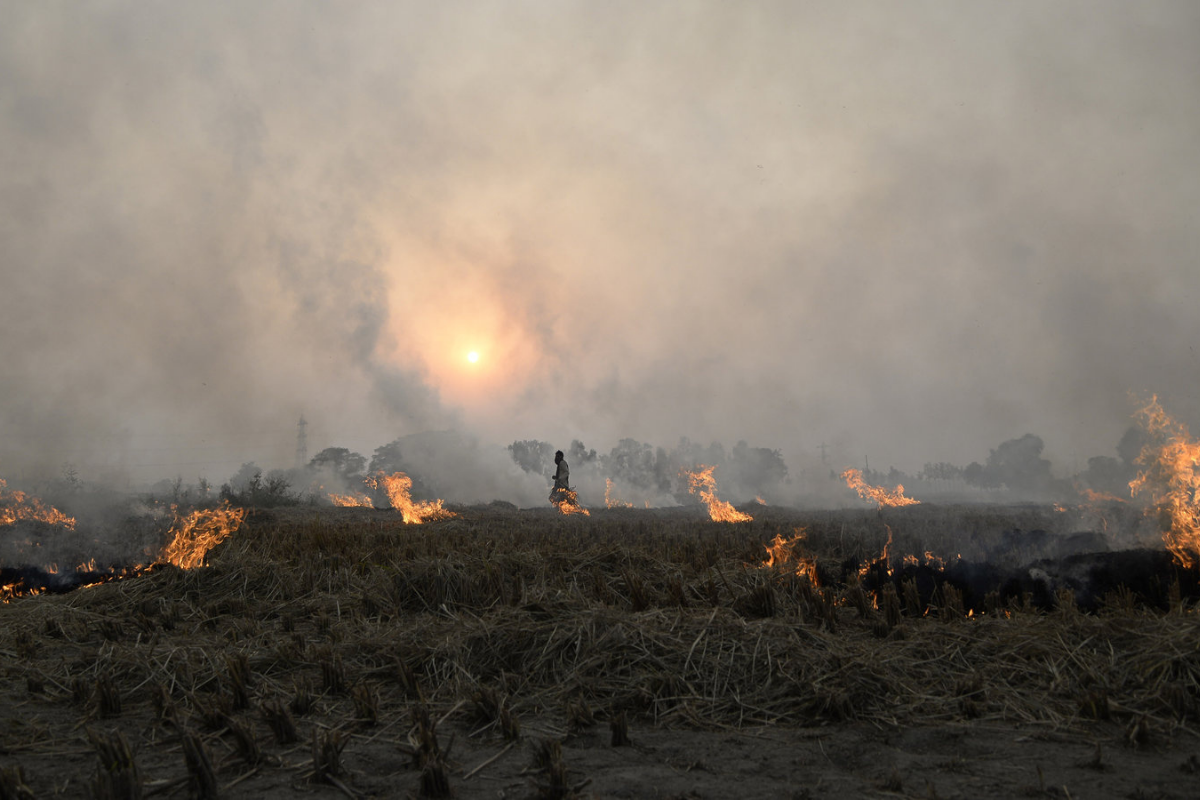 Carbon removal on the path to net zero